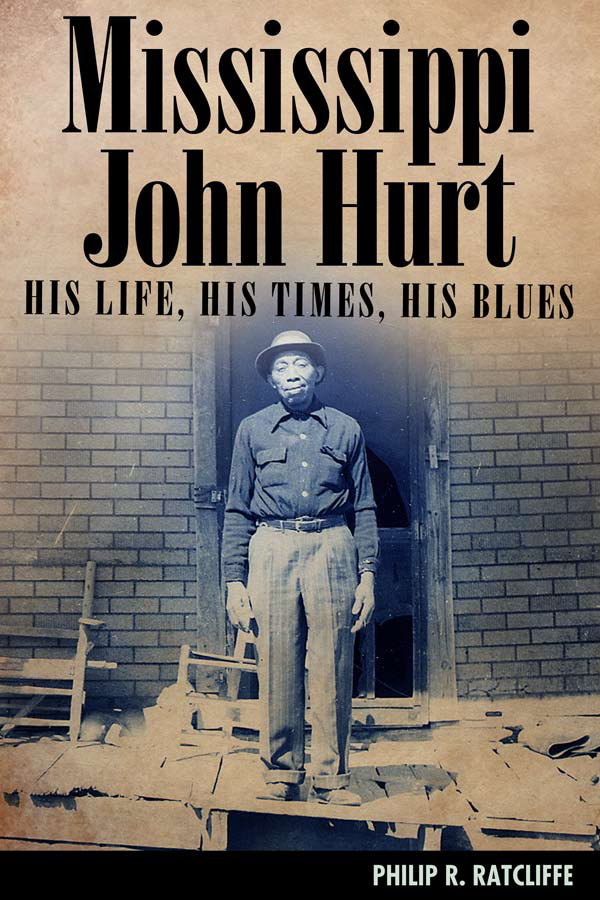 Link to Interview with Author

Link to University Press of Mississippi video interview with authorhttp://vimeo.com/27592642

Link to Interview with Author on Uprooted Music Review

Link to book details with the University Press of Mississippi

The University Press of Mississippi has this to say,

When Mississippi John Hurt (1892–1966) was “rediscovered” by blues revivalists in 1963, his musicianship and recordings transformed popular notions of prewar country blues. At seventy-one he moved to Washington, D.C., from Avalon, Mississippi, and became a live-wire connection to a powerful, authentic past. His intricate and lively style made him the most sought after musician among the many talents the revival brought to light.

Mississippi John Hurt provides this legendary creator’s life story for the first time. Biographer Philip Ratcliffe traces Hurt’sroots to the moment his mother Mary Jane McCain and his father Isom Hurt were freed from slavery. Anecdotes from Hurt’s childhood and teenage years include the destiny-making moment when his mother purchased his first guitar for $1.50 when he was only nine years old. Stories from his neighbors and friends, fromboth of his wives, and from his extended family round out the community picture of Avalon. U.S. census records, Hurt’s first marriage record in 1916, images of his first autographed LP record and excerpts from personal letters written in his own hand provide treasures for fans. Ratcliffe details Hurt’s musical influences and the origins of his style and repertoire. The author also relates numerous stories from the time of his success, drawing on published sources and many hours of interviews with people who knew Hurt well, including the late Jerry Ricks, Pat Sky, Stefan Grossman and Max and Holly Ochs, Dick and Louisa Spottswood, and the late Mike Stewart. In addition, some of the last photographs taken of the legendary musician are featured for the first time inMississippi John Hurt.

This book confirms what I have known and have come to accept and appreciate for most of my life; that my Daddy John had a supernatural spirit that had a far greater effect on people than his music alone. I did not arrive at this personal and profound revelation based on the numerous musicians that have been inspired by him.  Frankly, it was not his music, but his strong mythical spirit that has had such a resounding affect on my life!

Through the spirit of Daddy John, Phil and I met. When Phil called me weeks after the festival was over and asked how I would feel if he wrote a book about Daddy John’s life, little did Phil or I know that Daddy John’s spirit had already given him permission long before we met!

I am so grateful to Phil for all the hard work, travel, resources, and in-depth research, which have been applied in order to write this wonderful biography of Daddy John’s life. It will be a prized resource for my family for generations to come. Phil and I would never have met in our lifetime had it not been for some divine intervention. Thank you Phil and Annie for our spiritual link forever!

Link to University Press of Mississippi